BNP is in dream of recurring another 1/11 in country: Quader 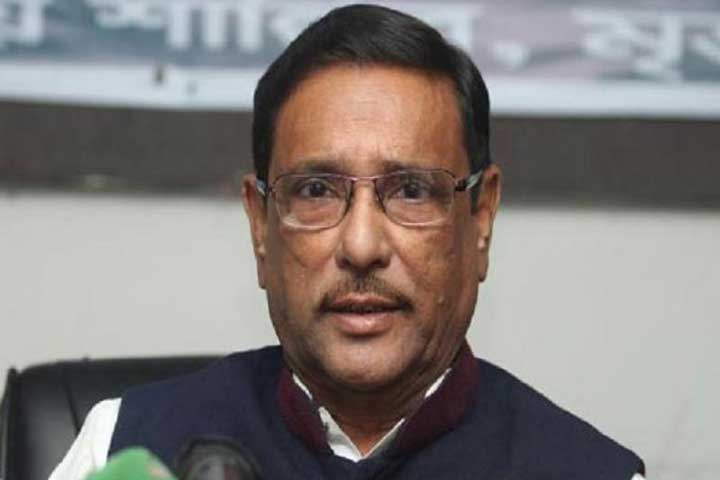 File photo
Ruling out the possibility of recurring the situation like one-eleven in the country, Road Transport and Bridges Minister Obaidul Quader today (Oct 25) said BNP is in a dream of recurring another one-eleven when the army backed caretaker government declared state of emergency for long two years after the regime of BNP in 2006. “BNP is expecting one more one-eleven...but it would not take place again in the country,’ he said. Quader, also general secretary of the ruling Awami League, made this comment while addressing a press conference at his ministry office in the secretariat in the capital.

“BNP wants to go to power not through the ballot, but through any undemocratic way,” he told the press conference.  Sharply criticizing a statement made by the BNP leaders that ‘BNP will never participate in elections under the ruling Awami League,’ the ruling party leader said “It [BNP’s statement] is nothing but a suicidal tendency by a responsible political party.” Quader, however, assured that the election will not take place under the Awami League government, but it will be held under the Election Commission (EC).  Although the BNP is still pursuing their ‘outdated way’ about participating in the polls, but it is obvious that the elections will be held timely in the country, he said. Blasting the BNP for resorting to rumour and propaganda as their political strategy, the minister said the birth of this particular political party is widely known to the people. “BNP is now in a dilemma as either they are not triggering movement or participating in the elections,’ he said. Terming the BNP as an isolated party, Obaidul Quader said not Awami League, but BNP is on the brink of bankruptcy as the party is in fear of election and people have no belief on their capacity to hold any demonstration. “Their [BNP’s] existence now has been limited to facebook and online,” the ruling party leader told the function. Regarding the selection of candidates for the local government elections, Quader said directives have been given to the grassroot level for sending particulars of the party’s tested leaders to the center. But appeal could be filed as per the party manifesto, if there is any allegation against any candidate, he added. Source: BSS AH

Quader urges party-men to take preparation for next polls

Law on EC formulation is a unique milestone: Quader

We have to initiate another mass upsurge: Fakhrul

People are dying unfortunately without getting treatment: Fakhrul

‘We know what police would do’