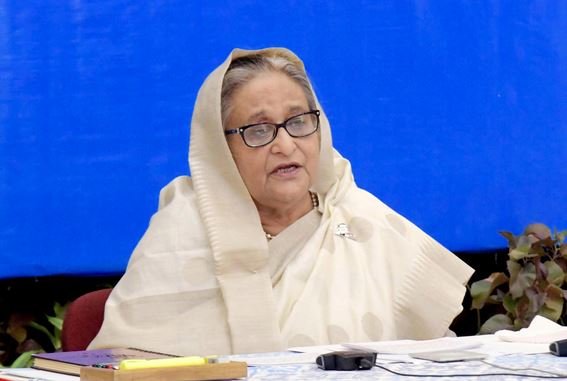 Photo: Collected
Prime Minister Sheikh Hasina today (Nov 21) said she did not want to see any impediment towards Bangladesh's advancement, calling upon all to march the country forward by maintaining the ability it has achieved to keep pace with the international standard.    "I just want on this Armed Forces Day (AFD) that the advancement of our country will not be allowed to be hindered in any way and Bangladesh can move
ahead on the world stage with dignity and honour," she said.   She was addressing a reception accorded to the gallantry award winning freedom fighters of the armed forces and their heirs marking the AFD-2021 joining virtually from her official residence Ganabhaban in the capital.    The Prime Minister also presented peacetime awards to the selected members of the armed forces for their outstanding contribution to their respective fields during 2020-21.    Sheikh Hasina, also in-charge of the defence ministry, said that the independence achieved by efforts of all people and blood of hundreds of thousands of martyrs cannot be failed, adding, "We cannot even let it happen."    "Bangladesh will move ahead with keeping the dignity we have achieved so far. InshaAllah, we will build a prosperous "Sonar Bangladesh" as envisioned by Father of the Nation Bangabandhu Sheikh Mujibur Rahman," she also said.   On behalf of the Prime Minister, Liberation War Affairs Minister AKM Mozammel Haque handed over the peacetime award to the recipients at the Army Multipurpose Hall in Dhaka Cantonment here.    Chief of Army Staff General S M Shafiuddin Ahmed, Chief of Air Staff Air Chief Marshal Shaikh Abdul Hannan, former Chief of Army Staff General Aziz Ahmed and five more officers from the armed forces received the peacetime award this year.    Marking the day, Sheikh Hasina also presented gifts to the families of the successors of Birshreshthos and other gallantry award-recipient freedom fighters of the armed forces.    PM's Security Adviser Major General (rtd) Tarique Ahmed Siddique, Chief of Army Staff General S M Shafiuddin Ahmed, Chief of Naval Staff Admiral M
Shaheen Iqbal and Chief of Air Staff Air Chief Marshal Shaikh Abdul Hannan were present.    Principal Staff Officer (PSO) of the Armed Forces Division Lieutenant General Waker-Uz-Zaman gave the welcome address at the function. The Prime Minister spelled out various measures taken by her government for the advancement of the armed forces and other institutions.   She said, "We have been implementing huge programmes for the training of the members of the armed forces and other institutes. So, we can now claim
that Bangladesh has achieved the ability to keep pace with any international standard organization."    Sheikh Hasina recalled the contribution of the armed forces to the Liberation War, saying that the armed forces personnel and the freedom fighters planned to attack collectively the Pakistani occupation forces on
November 21 in 1971 while the allied force of India joined the plan.    She continued that the Pakistani occupation forces had been defeated and surrendered on December 16 in 1971.   She also said, "Once, the most regretful thing was to dishonor the freedom fighters, who fought for their country's liberation, leaving everything behind. Such a time had come after August 15, 1975 (assassination of the Father of the Nation) that the freedom fighters feared to give their identities as freedom fighters."   After Bangabandhu's assassination along with most of his family members, Sheikh Hasina said that the history of the Liberation had been destroyed to erase the name of the Father of the Nation from the history, she said.   The Prime Minister added: "I don't know whether any country of the world tries to distort the history of their "Bijoygatha" (victory). But, such heinous act happened in this country."    Despite the BNP-Jamaat clique tried to remove the name of Bangabandhu from the history, the UNESCO has recognised the historic March 7 Speech of the
Father of the Nation as part of the world's documentary heritage while it has also started giving award titled "UNESCO-Bangladesh Bangabandhu Sheikh Mujibur Rahman International Award on Creative Economy."   After assuming power in 1996, the premier said they have reinstated the honour and dignity which was achieved by the Liberation War and but was later
destroyed by killing the architect of the country's independence on August 15 in 1975.    She added: "We are running the country imbued with the spirit of the Liberation War and ideal of Bangabandhu."   The Prime Minister said they have turned Bangladesh into a developed one following the footprints of the Father of the Nation and vowed to bring smiles on the faces of the countrymen by giving them an improved life. Source: BSS AH