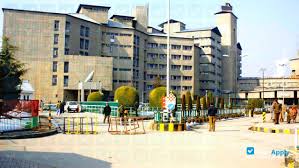 Photo: Collected
The doctors at SKIMS, Soura performed a unique cardiac surgery by replacing the aortic root, aortic valve and transposing the coronary arteries to the newly formed aortic root. This operation is known as Bentall’s operation. A team of doctors headed by Professor Muhammad Akbar Bhat performed the operation on a 52-year-old female, resident of Kupwara, who was suffering from aortic root (origin of largest artery from the heart) dilatation (diameter 6.5 cms). “She had a grossly leaking heart valve (Severe Aortic Regurgitation). The patient had the imminent danger of death due to rupture of the aorta (the largest artery of the heart) or heart failure and was not able to perform daily routine activities due to this heart ailment. The patient was evaluated by Cardiologists at the Department of Cardiology and planned for Surgery after approval,” it added.
Dr Mohammed Akbar Bhat, (Professor and Head division III) of the CVTS  department informed the patient was operated and the aortic root and aortic valve was replaced with an aortic Root conduit (Artificial synthetic tube, combined with metallic valve) and transposed both the coronary arteries (blood vessels supplying the heart) in one go. The operation was assisted by Dr Yaqub Khan, Dr M Sahil, and Dr Abid.  “During these operations, the heart is totally bye-passed and no blood goes through it. The function of the Heart and lungs is taken over by the heart Lung machine(CPB) during the operation and the heart is kept standstill (arrested) by instilling drugs till the operation is completed. After the operation the heart starts  beating of its own or is made to beat normally by giving electric shocks,” the hospital said “The Aortic root replacement (Bentall’s Operation) has been performed for the first time in SKIMS. This operation requires extraordinary knowledge and skills for better outcomes. After surgery, the patient was shifted to the cardiac surgery intensive care unit where an expert nursing team managed her postoperative period. The patient is doing well after surgery and has been discharged from the institute,” it said. “Such operations are being performed at very few centres in  India,” said  Dr AG Ahanger, Director and ex-officio secretary to the government, Sheri-Kashmir Institute of Medical Sciences (SKIMS). Source: India Blooms

DGHS issues alert at all ports to prevent monkeypox