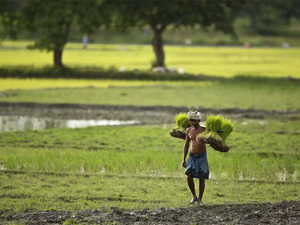 Photo: Collected
India's farm exports are likely to touch a record $50 billion in FY22, led by a sharp growth in shipments of rice and marine, meat and poultry items, according to officials.

Export of rice is likely to touch $9.5 billion in value terms, accounting for about half of the global rice export market, the officials said, adding that non-Basmati rice shipments are likely to clock $5.8 billion.

"We expect farm exports to reach the highest and record $50 billion this year," said one of the officials.
In the April to November 2021 period, export of agricultural products, including marine and plantation, amounted to $31.05 billion, up from $25.2 billion in the year-ago period.

Export of marine products is likely to touch a record $8 billion, while that of coffee could grow 45% and cereals 66%. Overseas shipment of meat, dairy and poultry products could rise 10% this fiscal, the official said.

"In spite of the disruptions caused by Covid-19, agriculture exports did well in 2020-21. The upward trend has continued during the current year," the official said.

In the first eight months of the fiscal, India's wheat exports rose by about 421%, sugar exports grew by 62% and that of other cereals increased by 79%. Source: The Economic Times