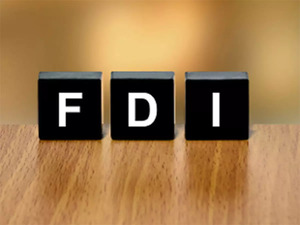 Photo: Collected
Even as the jury is still out on the extent of capital account convertibility, the reforms in the capital account have been strong enough to attract among the highest foreign direct investment (FDI), finds a study by RBI economists.
An analysis of the recent trends in FDI flows at the global level and across regions/countries suggests that India has generally attracted higher FDI flows and continued to remain among the top attractive destinations for international investors in line with its robust domestic economic performance and gradual liberalization of the FDI policy as part of the cautious capital account liberalization process.
A study published in the Reserve Bank of India's latest monthly bulletin said that an empirical analysis of factors influencing inward FDI, considering major countries in terms of its FDI stock position in India reflects that inward FDI is significantly influenced by the trade openness, economic growth prospects, market size, labor cost and capital account openness of the host countries.
Besides, foreign trade had a substantial share in the business where import intensity in purchase remained higher than export in sales for foreign subsidiary companies, the study notes.   FDI in India initially picked up in the mid and late nineties following a series of policy measures to liberalize and strengthen the FDI environment in the country. But they slowed down after the global financial crisis of 2008 because it affected India macro-economic fundamentals which continued till FY '2013-14. FDI again got a major push during September 2014 after the government launched the ‘Make in India’ initiative to facilitate investment, foster innovation and build best in class manufacturing infrastructure.
The reform made a positive foreign investment climate in India and helped in increasing growth in FDI inflows mainly due to strong investment in top three industry recipients viz., ‘manufacturing’, ‘communication’ and ‘financial services', the study notes. During 2015 to 2019, India received a cumulative FDI inflow to the extent of $ 173.3 billion and the share of top five investing countries in India stood at 76.7 per cent. Three major sectors viz., ‘manufacturing sector’, ‘communication services’ and ‘financial services’ together accounted for more than 50 per cent share in FDI inflows amounting US$ 89.6 billion during 2015-2019
Over the period the quality of FDI data has also improved in lines with globally best standards. A number of information bases on FDI Statistics for India have become available. Global concepts help in understanding the statistical methodologies that countries employ in compiling the statistics and the resultant statistics can be used for cross-country comparison though countries with liberal investment schemes experience major challenges in estimation of foreign investment.   Source: The Economic Times