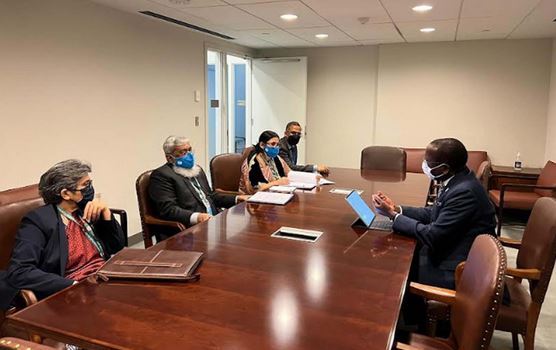 Photo: Collected
Cabinet Secretary Khandker Anwarul Islam, now in the USA on an official visit, has highlighted the importance of post-graduation support measures for Bangladesh in high-level meetings with UN officials.

The cabinet secretary is leading a two-member delegation to exchange views with the UN leaderships and experts on the graduation of Bangladesh from the LDC category, said an official handout in Dhaka today.

This visit takes place right after the adoption of the resolution on the graduation of Bangladesh from the LDC category on 24 November 2021 by the UN General Assembly.

During the visit, the cabinet secretary held fruitful meetings with President of the UN General Assembly Abdullah Shahid, President of the Economic and Social Council (ECOSOC) Collen Vixen Kelapile, Under Secretary General and High Representative for the Least Developed Countries, Landlocked Developing Countries and Small Island Developing States (OHRLLS), Courtenay Rattray and an expert team of the Committee for Development Policy (CDP) led by Secretary of the Committee Roland Mollerus.

During the meetings with the UN high officials, Khandker Anwarul said that graduation has been a long-cherished aspiration of the people of Bangladesh.

“Prime Minister Sheikh Hasina led the country from the front to achieve this important milestone despite unprecedented challenges due to the COVID-19 pandemic. She envisioned transforming Bangladesh into a middle-income country by 2021 and a developed country by 2041,” he said.

By achieving the graduation landmark, Bangladesh has set herself on the right course to fulfill these visions, the cabinet secretary added.

Referring to the leadership of Bangladesh in negotiating the 10-year Doha Program of Action for LDCs to be adopted in the 5th UN Conference of LDCs to be held in Doha, Qatar in January, 2022, Khandker Anwarul put spotlight on the post-graduation challenges, especially in the context of abrupt loss of international support measures (ISMs) by graduated countries.

He stressed that the Doha Programme of Action should ensure an incentives-based graduation support structure for the graduating and graduated countries. In this regard, he recommended for better inter-agency coordination to place the graduation issue high on the UN agenda.

The UN leadership and the experts briefed him about the new initiatives such as Sustainable Graduation Support Facility (SGSF) and enhanced graduation monitoring to respond to any crises or possible slide back.

They appreciated the role of Ambassador Rabab Fatima, Permanent Representative of Bangladesh, and Ambassador Robert Rae of Canada in leading the negotiations of Doha Programme of Action.

The cabinet secretary also addressed all officers of the Bangladesh Permanent Mission and provided important directives on the priorities of the government.

He visited ‘Bangabandhu bench’ set up after the name of Father of the Nation Bangabandhu Sheikh Mujibur Rahman at the North lawn of the UN headquarters, which was inaugurated by Prime Minister Sheikh Hasina during her visit to New York for attending the 76th UNGA.

The Permanent Representative of Bangladesh to the UN Ambassador Rabab Fatima and Member of Planning Commission Sharifa Khan accompanied the cabinet secretary during the meetings. Source: BSS AH