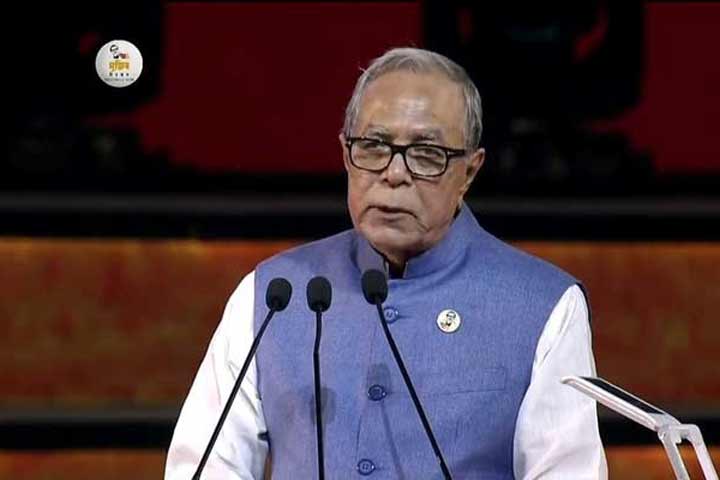 Photo: Collected
President M Abdul Hamid today (Monday) urged the government and political parties to work with honesty and sincerity for the sake of public interest to ensure progress and welfare of the nation as he addressed twin mega celebrations of the Bangladesh Independence’s golden jubilee and Father of the Nation Bangabandhu’s birth centenary. “When the government and the political parties work in the public interest with honesty and sincerity, progress and welfare of the nation is ensured,” he told a function at National Parade Ground in the capital. Recalling Bangabandhu Sheikh Mujibur Rahman’s pro-people political activities, President Hamid said a new chapter in the country’s politics would begin if the politicians could stand beside the poor to fulfill their (people) basic needs. The President mentioned that the celebration of the Mujibborsho (Mujib Year) would be an appropriate attempt to disseminate the life, thoughts and political philosophy of Bangabandhu to all as he attended the sixth day programme of the 10-day celebrations. Prime Minister Sheikh Hasina, also Bangabandhu’s elder daughter, presided over the function with visiting President of the Federal Democratic Republic of Nepal Bidya Devi Bhandari was present as the special guest of honour and eminent writer Selina Hossain as the keynote speaker . Education Minister Dr Dipu Moni and State Minister for Foreign Affairs Md Shahriar Alam also spoke on the occasion. Bangabandhu’s younger daughter Sheikh Rehana, President’s wife Rashida Khanam and Nepalese President’s daughter Usha Kiran Bhandari were also present on the occasion. The President urged all concerned to take proper steps so that the future generations can grow up being imbued with the principles and ideals of Bangabandhu and the spirit of the War of Liberation. “Bangabandhu’s life and works, thoughts and philosophy need to be spread to the new generations of the world including Bangladesh,” he added. Referring to the history which automatically comes up whenever one speaks about Bangabandhu, President Hamid said Bangabandhu worked since his school life absolutely for the people’s welfare and used to be anxious, caring a straw about his personal and family happiness or pleasure. He observed that the Father of the Nation Bangabandhu used to protest whenever he found any sorts of injustices, exploitations and repressions in the society.
“Bangabandhu had great confidence, love and trust on his fellow countrymen and lastly had to sacrifice his own life in return of the love of Bangali people,” mentioned Hamid, a very close aid of Bangabandhu. There is no scope to separate Bangabandhu and Bangladesh, the President said, adding, “Bangabandhu Sheikh Mujibur Rahman is not only a name . . . He is an institution, an entity, a history. As long as there will be Bangladesh, there will be Bangali people, Bangabandhu will remain as the source of inspiration till that day.” Highlighting the government’s development activities in line with Bangabandhu’s dream, the President said the incumbent government led by Prime Minister Sheikh Hasina has been making relentless efforts to realize his dream. The President extended a cordial welcome to his Nepalese counterpart for attending the historic celebration of Bangabandhu’s birth centenary and the independence’s golden jubilee. President Hamid recalled with deep appreciation the unstinting moral and material support of Nepalese political leaders as well as people extended to Bangladesh during the Bangladesh’s War of Liberation in 1971. “I express heartfelt thanks to the honorable President of Nepal for her valuable speech which reflects the close and friendly relationship between the two countries,” Hamid added. “The country is advancing fast towards becoming a developed and prosperous country. Bangabandhu wanted a firm position of Bangladesh in water, land and air to turn the country into ‘Sonar Bangla,” he stated. His worthy daughter Prime Minister Sheikh Hasina has been persuading his unfinished dreams putting the sign of efficiency in different nation-building works and undertaking mega projects, he added. They enjoyed the cultural function there maintaining the health rules due to Covid-19 pandemic. Source: BSS AH

‘Relation with China will be damaged if Dhaka joins Quad’

Death due to coronavirus decreases in last 24 hours

Death and detection due to coronavirus increase in last 24 hours

Momen hopes US assistance for Rohingyas in Bhasan Char